A few tails for Hallowe'en. 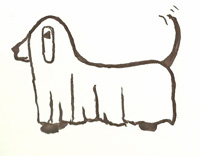 There is believed to be the ghost of a black dog roaming around the nearly 900 year old castle. The origins of the dog lie with the aunt of Henry VI, who dabbled in the arts of witchcraft and necromancy. She was charged, tried and imprisoned in Leeds Castle in 1431 for the rest of her life. Around this time were the first reported sightings of the black dog. The dog is described as being of average size, like a curly coated retriever, who appears and disappears fading through walls and passing through closed doors. The dog also has the reputation of being a harbinger of death. However on one occasion the dog has said to have saved a woman's life. The woman, sat in a bay window at the time, seeing the dog disappear into thin air got up from her seat to investigate. Moments after she got up the window behind where she was sat shattered and the seat crumbled falling into the moat below.

One of the most reported ghostly sightings is that of a black dog that watches people from the woods. Although it never goes any further from the tree line it is said that the hound can be heard growling at anyone who happens to encounter it.

For over 50 years the neighbourhood of Bellmont Hillsboro, Nashville TN has had a special guardian. Preston, the boxer, patrols the streets making sure children don't stray into the road in front of cars by gently bumping and tugging them. Preston is out and about every Hallowe'en after reportedly saving the life of a young boy by pushing him out of the way of a speeding car and taking the impact of the collision himself.

The great dog is said to haunt the guard room of Peel Castle. It is even thought that during the reign of Charles II soldiers would only move down a dark passage way in pairs between the guard room and their captain's quarters in fear of the dog.

In Tring, Hertfordshire, a fierce black dog with glowing red eyes haunts the sight of the old gibbet. Locally known as the Lean Dog it is believed to be the spirit of a chimney sweep accused of murder. When the dog is approached it is said that the dog simply sinks into the ground.

Somerset's Gurt Dog usually appears as a huge, shaggy haired black dog with red eyes. Usually seen by footpaths or roads at night, far from being a terror, the dog is said to lead or follow lost travellers and protect children while they play out on the moor.

A black dog is said to have haunted Newgate Prison for over 400 years. According the legend the dog appeared after a scholar, imprisoned in 1596 for witchcraft, was murdered by his fellow inmates before his trail. although the murderers escaped the dog  followed them wherever they went.

At the Tudor House Hotel there have been some sightings of a black labrador stood at the top of a set of stairs and at The Golden Fleece in York at dog is said to tug at the trouser leg of patrons.